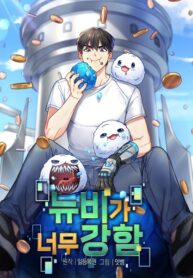 The Newbie is Too Strong

Content:
JaeJu (which means “skill” in Korean) grew up without parents in an orphanage skillfully, just like his name suggests. One day, he heard that the orphanage was having a hard time and would have to close in 3 years. While trying to raise money for the orphanage, JaeJu got an alert on his phone. On it, he saw a video of himself climbing the tower as a BJ (broadcasting jockey aka streamer). Seven years ago, a tower suddenly appeared and randomly took people into it. If you successfully complete the tower and become an “Awakened”, it’s only a matter of time before you get rich!
Chapter #Time upload
Maybe coming in the next issue
The Newbie is Too Strong Chapter 43
The Newbie is Too Strong Chapter 44
Top